Amazon Prime vs Netflix: Which is better?

"Which do you prefer, Netflix or Amazon Prime? I'm currently subscribed to Netflix, but recently I have been wondering if Amazon Prime is better."

Both Netflix and Amazon Prime are on-demand streaming video service, but they are radically different from each other in several areas including price, content, and some other features. For those who have such a question quoted above, this article will help you understand the detailed differences between Netflix and Amazon Prime Video better, and also helps you make the best choice for all your future endeavors. 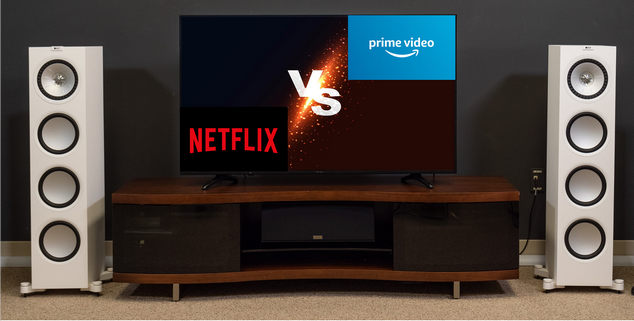 *Note: You can rent or buy movies and TV shows on Prime Video even if you don't have an Amazon Prime membership.

Amazon Prime Video (Amazon Prime) is recommended if you are looking for a better price offer. If you are a Prime member for the first time, you can get a 30-day free trial even with a monthly plan. It is also possible to change to the membership type during the subscription. Additionally, Amazon service is more convenient because it has shipping benefits for both Prime Music and Video. Netflix, on the other hand, doesn't offer a free trial period, but it has a better pricing system. You can choose from three options, "Basic", "Standard", and "Premium", so it is more flexible for your personal needs.

Despite Prime Video’s quality can vary by the production of a video, the video quality is generally great on Amazon Prime, especially the price doesn’t go up even for the videos in 4K with HDR and Dolby Atmos quality, this gives a big advantage for those who care about video quality and price.

Netflix, meanwhile, has almost the same video quality as Amazon Prime, there is no much difference in video quality, but Netflix has different video quality that can be played depending on the price plan. If you want to get the best streaming quality, a more expensive plan is required, which may be a disadvantage compared to Amazon Prime that doesn’t charge for the video quality.

Remember, Netflix offers three price plans, "Basic", "Standard", and "Premium", you can only get the best video quality (4K) with a Premium membership.

Amazon Prime Video has separate subtitles and dubbing, so when you want to switch subtitles, you need to reselect another video. In other words, it does not support episode selection or subtitle switching during playback. However, you can adjust the quality of Prime Video during playback.

On the other hand, Netflix can switch subtitles while streaming, there is no need to close and switch videos each time. In particular, the operability of Netflix's intro skip function and automatic trailer playback is also very good, if you are watching a drama, there is a very little gap between the episodes.

The Amazon Prime Video and Netflix have in common is that they both support "offline playback." As more and more people are watching videos with their smartphones, the biggest concern is how much data they can afford. These two services both have a download function that allows users to watch movies and dramas without the network connection. However, there is a limit to the number of downloads. Amazon Prime Video seems to have different numbers from 15 to 25 depending on the region, and Netflix is up to 100. Of course, you can delete the downloaded video after watching it to save more space.

The compatibility of software should be considered before purchasing a membership, a software or program must be compatible with the devices you own. Amazon Prime Video is compatible with a wide variety of devices and platforms, including Windows PC and Mac web browser, Roku, Apple TV, Amazon’s Fire TV and Fire devices, iOS, Android, Xbox One, Xbox 360, PlayStation, Nintendo Wii U, various models of connected Blu-ray players, smart TVs, and Google’s Chromecast.

Amazon has a lot more titles on offer as compared to Netflix. Knowing that, you might assume Amazon is the better choice for films. But many of the movies on Amazon Prime are quite old and not many of them are new released which you might not want to watch.

Meanwhile, Netflix offers fewer films, but most of them are original produced. Besides, when it comes to television series, Netflix is definitely the best choice. Not only does it have a larger selection of series content, but its original shows are also some of the most popular programs such as Stranger Things, The Witcher, Black Mirror, Tiger King, and many more.

Furthermore, if you have been using other services from Amazon like Amazon Music, Kindle, or online shopping, Amazon Prime will be a good choice in case they have any promotions going on with other services.

As we mentioned above, either Amazon Prime or Netflix has the limit set for downloads, and the downloaded videos can only be watched with their official application. Here we have a Netflix Video Downloader that can help you download any videos available on Netflix to your local drive with 100% original quality. With this tool, you can watch Netflix videos offline on ANY devices or players.